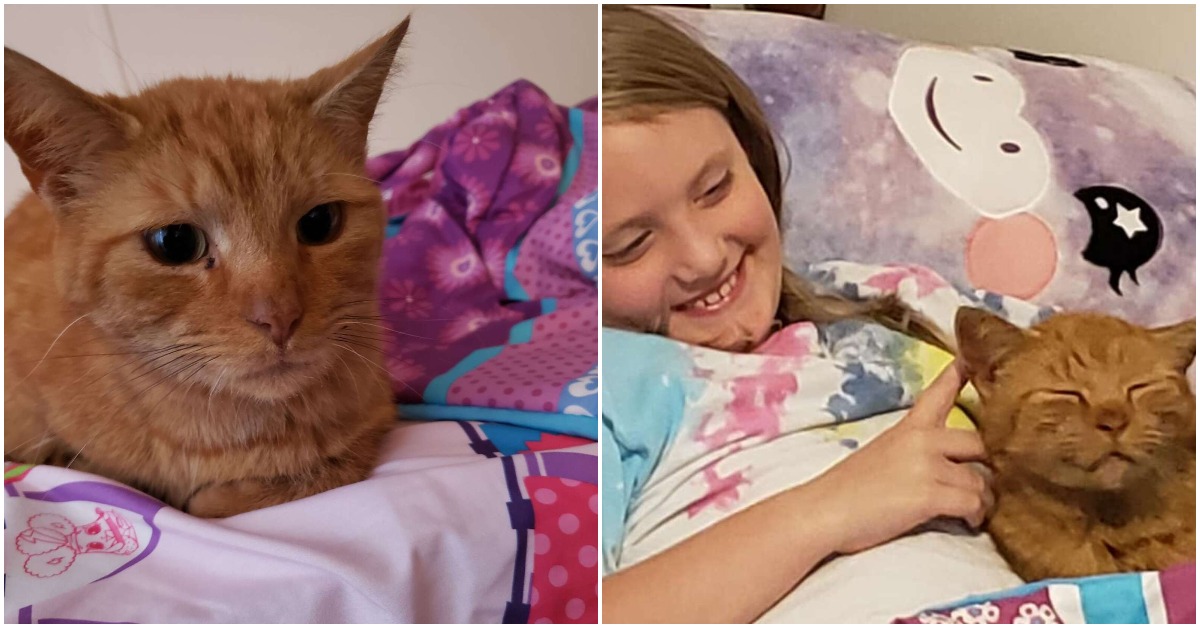 Lynn Farrell’s daughter has always loved animals, so she was pleased when the family relocated to a new home near a huge cat colony.

Farrell’s daughter would pet and feed every animal she sees, but because the cats are wild, Farrell never had to worry about one of them coming inside.

Farrell put her kid to bed early one night, anticipating the customary outbursts. “OK, Mom,” her daughter said instead.

“I was instantly concerned as any mother would be when she consented to go to bed so easy,” Farrell told The Dodo. “They both jerked their heads up as soon as I opened the door, like, ‘Oh crap, we’ve been caught.'”

Under the blankets, Farrell noticed a huge orange cat snuggling up with her kid. While her mother was preparing supper, the little girl sneaked the cat inside and relocated a litterbox from the bathroom into her closet, along with some food and drink.

It wasn’t the first time they’d gotten together for a sleepover.

“I could see they had a particular connection immediately away,” Farrell remarked. “He made a wise choice in his new human companion. So they both went to bed warm, happy, and snuggling after a wash and a brush.”

Farrell brought the cat, whom they named Pumpkin Jr., to the vet, where he was dewormed and treated for fleas. And after some asking around the neighborhood, they discovered that Pumpkin Jr. was an outdoor cat belonging to their neighbor across the street.

With permission from Pumpkin Jr.’s owners, the cat now visits his little girl every day, and their sleepovers have continued.

“He’s so nice and purring all the time – I don’t believe I’ve ever heard him stop,” said Farrell. “Her chamber is his realm, and our other three cats have been warned not to enter his human’s room.”

She went on to say, “I guess I have a fourth cat now.”