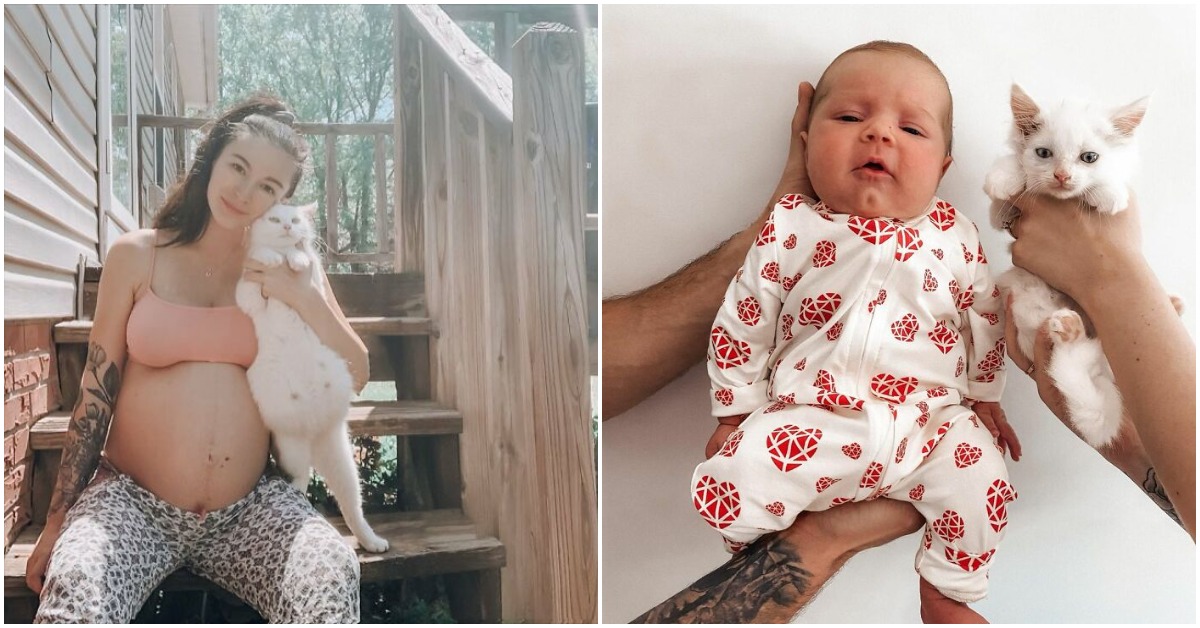 Lauren Maners has always enjoyed fostering animals, but when she was getting ready to give birth to her daughter, Kylie, she decided to take a break.

“I had a long history of fostering and rehabilitating animals,” Maners told The Dodo, “but as I got closer to the end of my pregnancy, I decided it was time to take a break from all of that because the animals I usually fostered/rehabilitated were usually sickly and required a lot of care, which I would not have time for once the baby arrived.”

Until she met Dove, she was set in her resolve.

Maners and her husband were going home from breakfast the same morning she made her “no more fostering for now” decision when they came across an injured cat in an empty parking lot on the side of the road. She quickly had her husband pull over to check on the cat, and it was then that she learned the cat was not only wounded but also pregnant.

“I knew she was in serious health and felt a connection to her since we were both extremely pregnant,” Maners explained. “I caught her by enticing her up to me with leftover food and putting her in my jacket, and we took her to the police station.”

The couple took the cat, subsequently named Dove, home after she was treated at the vet and got her settled in. Instead of finding out if she had a family seeking for her, they learned from locals that she had been a stray for the majority of her life.

Maners decided to break her own rule and foster her pregnant friend and her future kittens, finally assisting them in finding their forever homes.

It didn’t take long for Dove to get comfortable in her new home, and it was clear that this was where she was meant to have her babies. The two pregnant moms bonded quickly and loved spending time together as they moved through the final weeks of their pregnancies.

“She would follow me around everywhere I went, and loved sitting outside with me in the mornings in our fenced-in area and letting me rub her belly while we ate breakfast together,” Maners said.

It was finally time for Maners to meet her daughter, Kylie, and when she got home from the hospital, she learned that Dove had given birth to her own children.

“They may have been born at the same moment,” Maners said.

Dove had six adorable little kittens, and Maners couldn’t get over how special it was that they’d given birth at the same time. As the kittens grew, so did Kylie, and both of the moms’ babies were able to play together as they got bigger and discovered the world.

“When my daughter was 5 weeks old, she began to notice the kittens when I would take her in there with them to help me feed and care for them,” Maners said. “The kittens were also quite interested in my daughter.”

Maners and her family found all seven of the adorable little family the greatest forever homes after months of fostering them. While they were disappointed that they couldn’t keep any of them, none of them live far away, so Maners and Kylie may still see their dearest pals on occasion.

“Fortunately, the mother cat went to live with a friend of mine, so I can still get updates on her, and some of the kids went to individuals I know, so I’ve been able to see them,” Maners explained.

Maners broke her rule of “no more fostering while pregnant” by fostering a pregnant mom cat who gave birth at the same time as her, and she and her daughter, Kylie, would not swap the experience for anything.