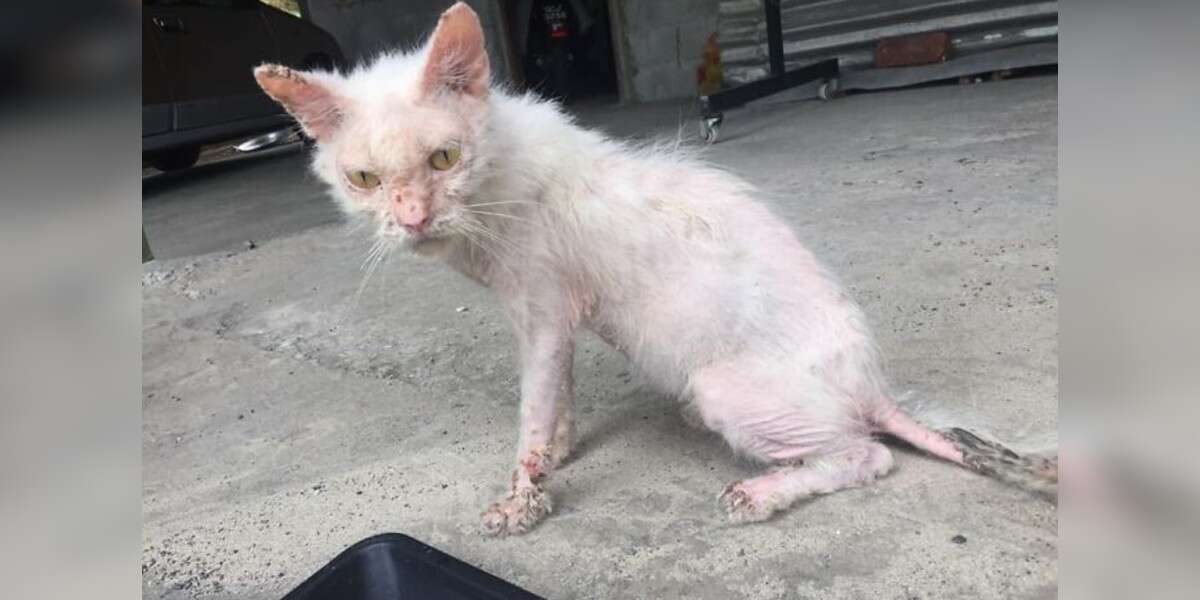 A tuft of white fur was discovered under Nur Hamizah Had’s vehicle a year ago when she was in her Malaysian property.

She was horrified to see a frail kitten as she knelt down to have a closer look.

The tiny cat was barely more than skin and bones, covered in sores, dirty and nearly bald. She smelled awful — but Hamizah Had couldn’t look away.

“She looked very poor and was begging me to help her,” Hamizah Had told The Dodo. “I was so touched the first time I saw her. I told myself, ‘If she can survive, I will take care of her and love her as much as I can.’”

The kitten appeared to be too ill to live, but Hamizah Had could tell from the way she looked at her that she was a fighter. A cardboard box was then brought by Hamizah and set in front of the cat. To her amazement, the kitty immediately in and sat down.

Hamizah had called the kitten Meimei and taken her inside.

The next day, she took Meimei to the veterinarian where she received advice on how to aid in her recovery. The kitten weighed barely 4 pounds and had additional skin problems in addition to open sores that required medical attention.

But with the care and love of Hamizah Had, Meimei’s appearance began to change.

Her fur grew back.

Meimei, who now weighs more than 13 pounds, adores living in a home.

She enjoys playing about my house, eating, and sleeping, according to Hamizah Had. But if she spots a stranger, she will flee and hide.

Hamizah Had is always willing to assist a stray cat in need, and she thinks that Meimei’s metamorphosis would demonstrate that every stray cat may convert into a princess if they are simply shown some love.