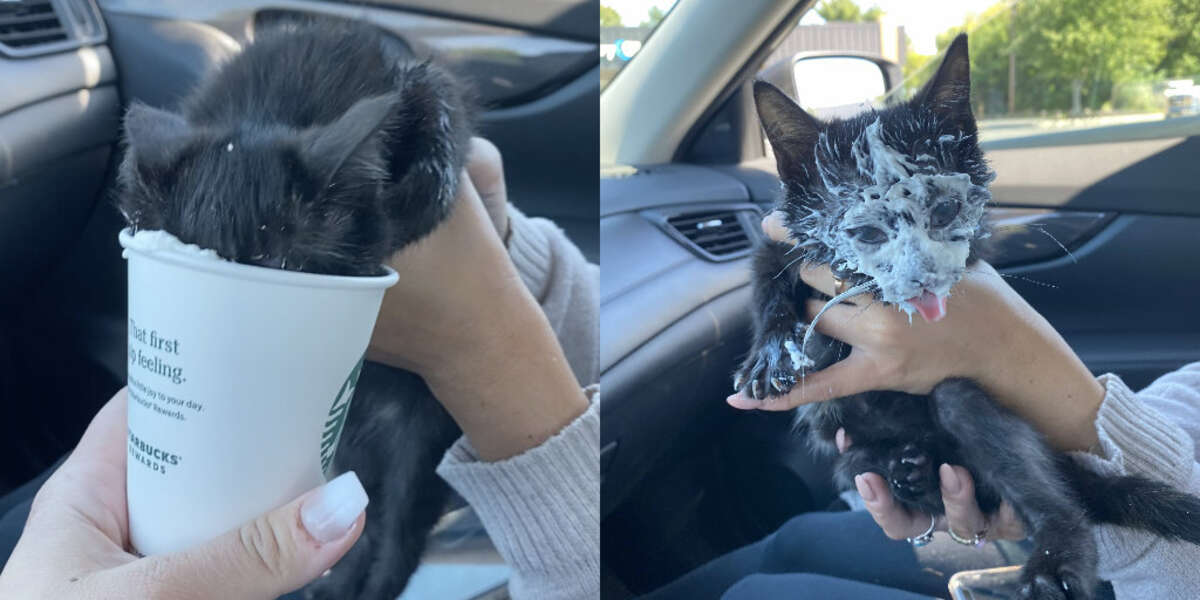 Meredith and her siblings were discovered outside in the storm, drenched in water, and in need of assistance immediately. When they entered Foster the Furbabies’ care, they were only around 3 weeks old and were quite ill, suffering from parasites, eye infections, and upper respiratory illnesses.

“Meredith was the runt of the litter, and we weren’t sure if her or her siblings were even going to make it,” Gianna Cirucci, co-founder of Foster the Furbabies, told The Dodo. “Thankfully, they all thrived while in our care, but it definitely did not come easy for Meredith.”

Meredith had vision problems for a while, even after her siblings had recovered. She was ultimately certified for adoption after several trips to the veterinarian and several different illnesses, however the doctor did warn that she would eventually experience a small eyesight impairment. Even though they thought they’d be sorry to say goodbye, her rescuers were overjoyed to see her fully recovered.

She was one of the first cats we ever saved after beginning our rescue, and we’ll always love her, according to Cirucci.

After everything Meredith had been through, her rescuers wanted to do something special for her before she went off to her forever home, and so they decided to take her to get a Starbucks Puppuccino.

Meredith was always a little obsessed with food, so they thought she’d definitely appreciate the treat.

“She was always (and still is) extremely crazy when it comes to food,” Cirucci said. “She would try to eat anything and everything.

If she smelled something I was eating, she would climb up my body and try to either eat the food out of my mouth or go face first on my plate. For being the runt of the litter, this girl had a HUGE appetite.”

Her rescuers gave Meredith her treat after going through the drive-through and ordering her a Puppuccino, and she went absolutely crazy over it.

She instinctively dove headfirst into the cup, and Cirucci recalled, “We started filming her since it was a moment we never wanted to forget.” We were in tears from laughing so hard, and I started to wheeze.

“More of the pup cup got on her face than in her mouth and we cleaned her up directly after, but she definitely had a good time and enjoyed her treat,” Cirucci said “She kept trying to pull the cup back to her face and was so upset when we wouldn’t let her have any more.”

Everyone went crazy over the lovely video of Meredith receiving her surprise, which they decided to upload online. Some people were worried about feeding dairy to cats, but Meredith’s rescuers did their homework and discovered that it’s okay for kittens to consume it occasionally. There’s no need to be concerned, as the majority of the whipped cream landed up on Meredith’s fur.

While her rescuers miss her, they’re so glad she found such a perfect home, and will always have the goofy video of her trying to eat a puppuccino to remember her by.