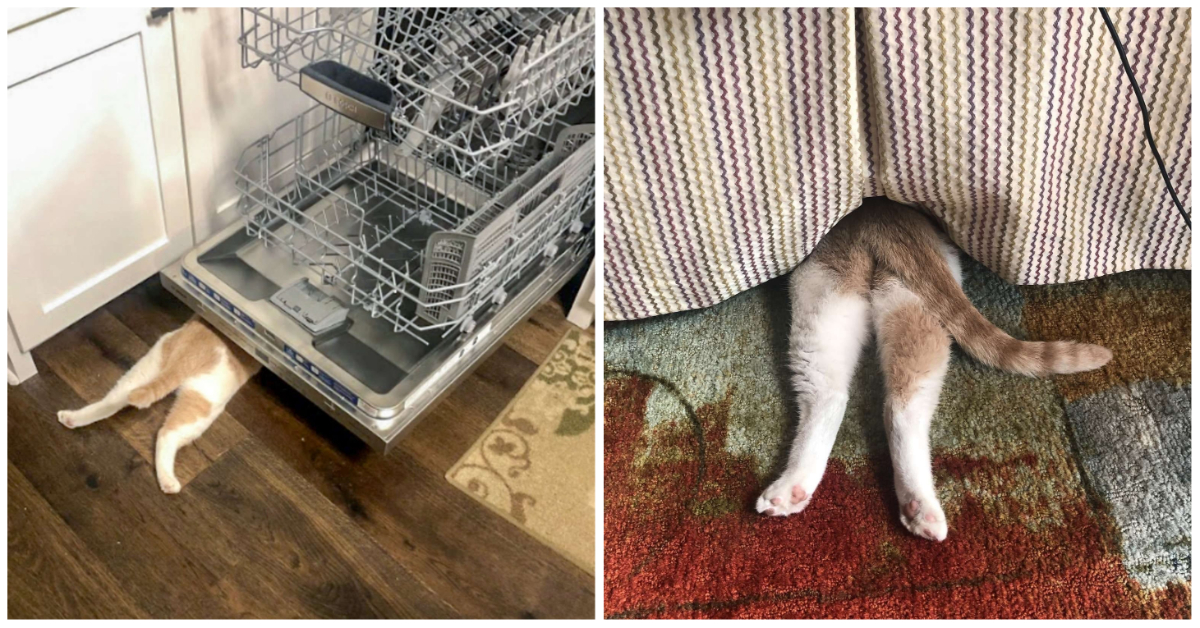 Keanu was saved from the industrial warehouse where his mother was working when he was barely a kitten. He was initially hesitant, but he rapidly lost his shyness and is now the friendliest cat in the neighborhood.

“He is cautious for the first five seconds he meets someone, then he is instantly their best friend,” Dani Baker, Keanu’s mom, told The Dodo. “When he’s not hiding, Keanu likes finding lizards and leaving them (alive and physically unharmed) in his dad’s shoes, gym bag, work bag, etc.”

Even though Keanu is very outgoing, one of his favorite hobbies is hiding wherever he can fit. He enjoys being able to quietly observe events. Keanu clearly gives the impression that he is an expert at concealing, but in reality, his abilities still need improvement.

“[He hides in] different spots,” Baker said. “He gets creative depending on the furniture around. But it’s always in the room where his dad is. We joke that Keanu is always spying or keeping a watchful eye on his dad.”

Keanu can always find a fun place to hide, whether it’s behind a table or in the open dishwasher. Even though his family can still see him the majority of the time, it was evident right away that Keanu hasn’t yet grasped that fact. Every time, he unquestionably believes he is completely hidden.

“[He thinks] we absolutely can not see him,” Baker said. “We call to him (and he normally meows back) but when he’s hiding he doesn’t respond. Even if we tap his feet to let him know we see him, he won’t move.”

Keanu is adamant about upholding his cunning reputation. He doesn’t care whether his family can still see him; all that counts is that he believes they can’t. He hides occasionally to take a little snooze in privacy, occasionally to watch his family dine, and occasionally just to maintain an uninterrupted check on things. He always has a justification.

Lately, Keanu’s new favorite spot to hide is under the Christmas tree, where, surprise, his family can still see him. Keanu really loves to hide and his family really loves to laugh at his adorable attempts at hiding, so it all works out in the end.