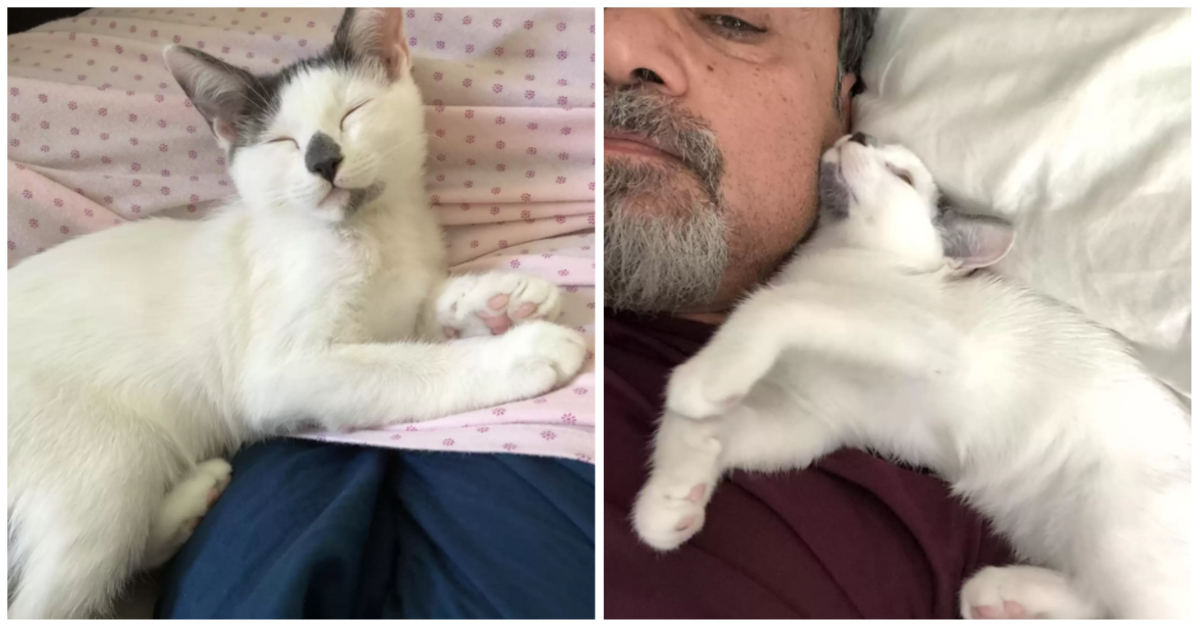 Hira Khalid’s father first said “no” when she requested him to watch her kitty, Bilu.

Khalid, a Pepperdine University student, told The Dodo that “he didn’t want the mess.”

Bilu was just adopted by Khalid from the NKLA Pet Adoption Center in Los Angeles, and she fell head over heels for her new family member right away.

“He’s the most affectionate, caring cat,” Khalid said. “I’m honestly so lucky that I got him because he’s so friendly — he goes and sits on anyone’s lap and starts purring, and cuddles with them on their chests.”

But then Khalid was invited to go on a week-long trip to Mexico with friends, and knew she had to find someone trustworthy to babysit Bilu. So she asked her parents. Her dad, however, was convinced Bilu would act like their old family cat, Bubba.

“He [Bubba] was an outdoor and indoor cat … so he’d go outside, and come back in all muddy, and leave footprints everywhere,” Khalid said. “He wasn’t too clean with his litter as well, and he shed a lot. My parents were against cats ever since. It’s been five or six years since they had a cat.”

Khalid made an effort to hire a different individual to watch Bilu. However, when she was unable to locate anyone, she went back to her parents. “You know what? I said. He is good; he is toilet trained. I absolutely need you to keep him for a week, she pleaded.

Khalid said that his father had responded, “OK, alright, if there is no other alternative.” “So I gave Bilu a week’s worth of care.”

Khalid was happy that she wasn’t getting any complaints while she was on vacation, but she was continually curious about life at her parents’ place.

Then, a few days into her vacation, she received some unexpected photos: her dad had taken shots of himself while holding Bilu close to his neck.

Khalid was shocked — and delighted.

“I was surprised that my dad bonded with Bilu,” Khalid said. “I knew Bilu was the most friendly cat ever, but I didn’t know [how] much Dad would get that close to him.”

She said, “And my dad never does anything like that, like emailing selfies.” “I was laughing so hard when I saw those. It was absolutely unexpected.

She went to get Bilu when Khalid got back to Los Angeles. Although her father didn’t agree to watch Bilu once again, she has a suspicion that both of her parents were sad to see him depart.

When I put him in his backpack to bring him back to my flat, they did make a suggestion that they would miss him, Khalid added.

Khalid doesn’t, however, currently have any immediate plans to go somewhere else.

Khalid said, “I didn’t even want to leave him.” I was always missing him.