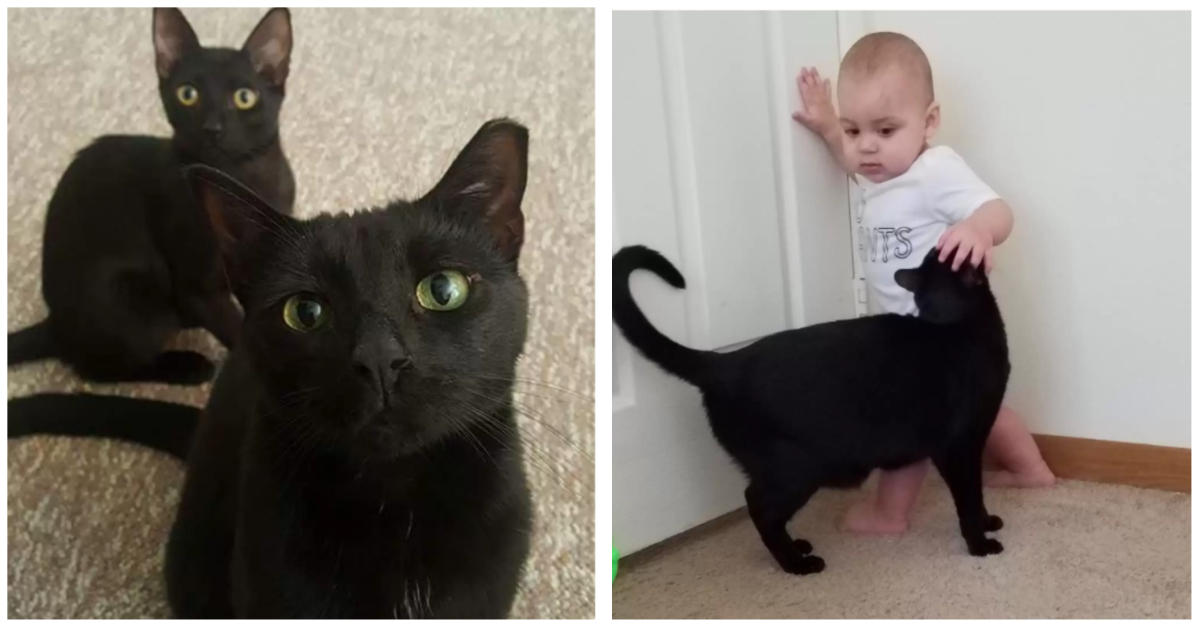 When Jordan Jeffcote was out purchasing cat food for her cat, Jinx, she happened onto an adoption event. She was six months pregnant at the time. She went to see the kittens and fell in love with the last of his litter, a little, 3-month-old black kitten, but no one else appeared to want him since he was black.

Despite already expecting a new addition, Jeffcote felt her family had room for one more and accepted Little.

Jeffcote took Little home, and had no idea back then just how much of an impact he would make on her family. Little and Jinx became fast friends — and then Jude was born, and Little met his best friend.

“When we brought Jude (my son) home from the hospital, the cats immediately smelled his car seat,” Jeffcote told The Dodo. “Jinx, smelled his foot and walked away for her afternoon nap. And Little immediately erupted into a bushel of purrs and fell asleep next to the car seat, and remained there even after we took Jude out of it.”

From that moment on, Little and Jude became the best of friends. Both had just joined the family, and both still had a lot of growing up to do, and it seemed they were the absolute perfect match.

Jude is 10 months old now, and he and Little do absolutely everything together. Little hates being apart from Jude even for a second, and is the most patient cat in the entire world with his little brother.

They do everything together, according to Jeffcote: “They stroll together, watch TV together, play fetch. Little follows Jude everywhere he goes, and vice versa. He snoozes outside his room at night and during naps as he waits for him to play.

Little is very protective of Jude, and is always right next to him when he starts to cry, wanting to help. He’s a huge softie, and is happy to offer love and cuddles to anyone who wants it, but of course, Jude always comes first.

“When Jude cries, Little will roll over in front of him and purr,” Jeffcote said. “As if he knows he’s anxious. He does the same thing to me when I am anxious. He is protective of me and Jude, he will swat at my husband (playfully) if he comes near us. But he is so gentle that my husband will say ‘Ow’ and he will just meow a tiny apology at him.”

When Jeffcote first adopted Little, she had no idea that she was adopting a new best friend for her future son. Now the pair get to grow up together, and will always be by each other’s side, no matter what.