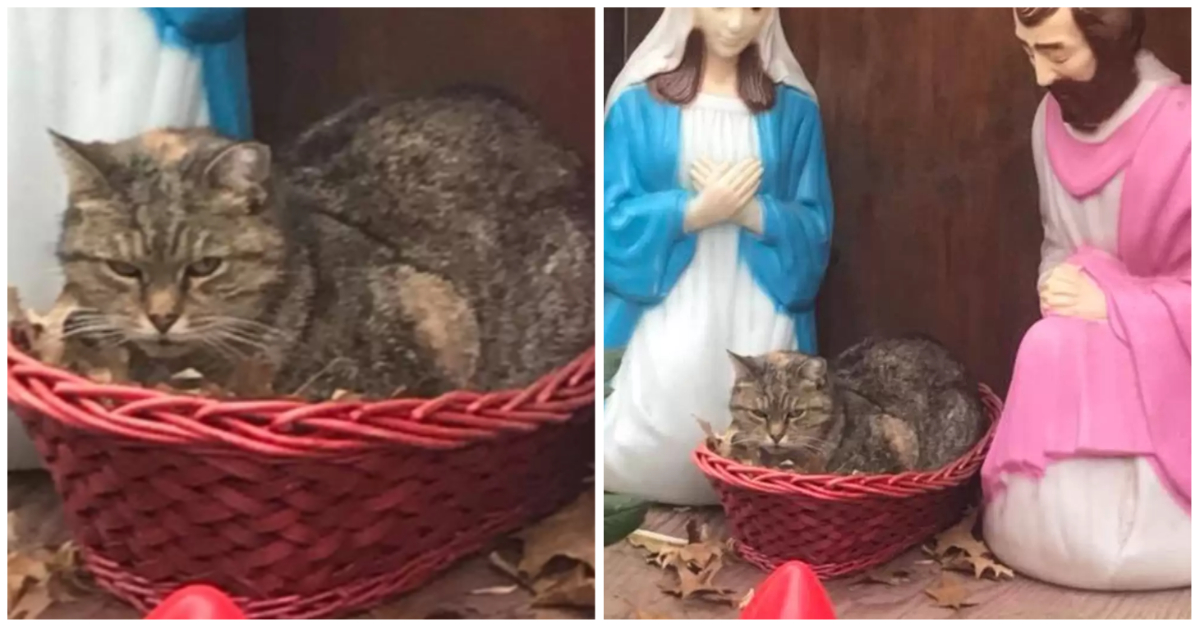 This fat grayish-orange cat had recently settled in to watch the world go by, peering out grumpily through his sourpuss eyes. It was obvious that he had no intention of cheering anyone up. But now it’s his fault!

He actually did that.

Photographer Brooke Goldman wasn’t where she intended to be early on a brisk fall New York City sidewalk last Sunday. Goldman made the error of agreeing to accompany her lover on his morning stroll to the train since he had trip plans. She actually preferred to stay in bed. She nevertheless went through with it.

Goldman admitted to The Dodo that “I was very out of it.” I wasn’t at all prepared for the day since I was rushing home to get back to sleep.

But then, with one drowsy step, everything changed. Goldman’s eyes rested on this as though by some divine vision:

There, a short ways away, a random plump feline sat nestled in the manger of a little nativity scene.

Though he obviously had no qualms about commandeering the spot, or concern about offending its intended occupant, the disgruntled cat did seem to relish in the quiet reverence shown to him by the display’s figurines.

Goldman’s reaction was a little different.

“I was laughing my ass off,” she said.

And with that, the unknowing cat had made Goldman’s day better.

“I suppose it’s safe to say that when I was making my way home, he made me happy. Without a doubt, it was uplifting “She spoke. “Having so much fun that early in the day makes the day much happier overall.”

Fortunately for the rest of us, Goldman took pictures of the furry Scrooge to help spread holiday happiness. It is after all the season for joy, laughter, and merriment—even if it comes from a cranky cat.

According to Goldman, “a good animal picture can heal anything.”