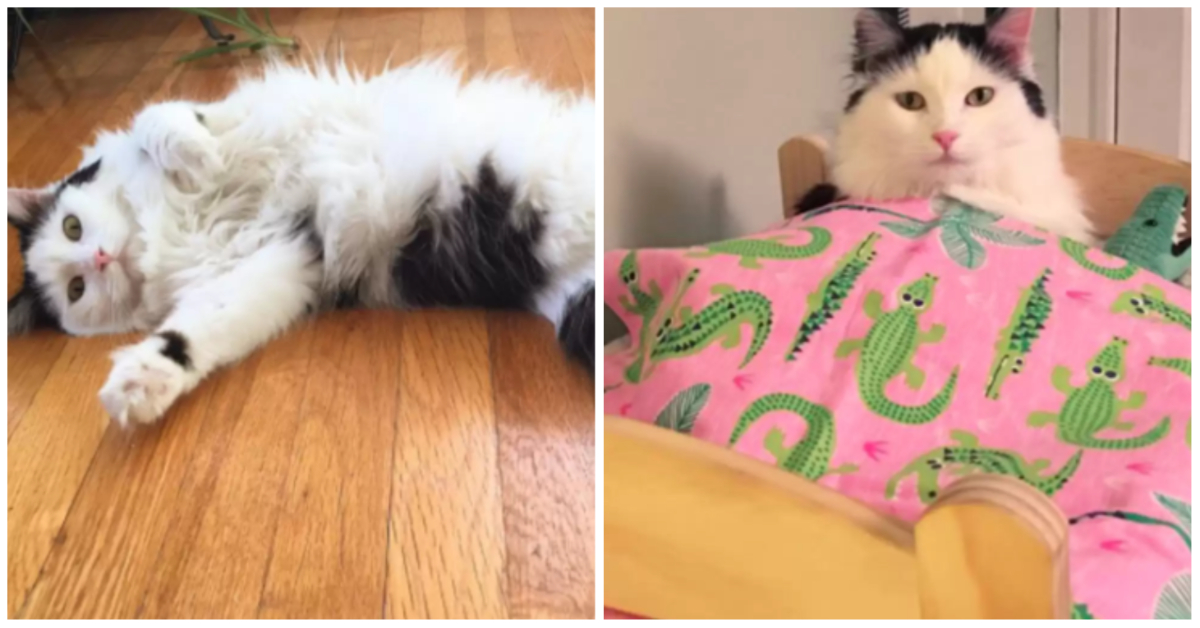 The cat Sophie was rescued from a hoarding scenario when she was around 3 years old, when she and a large number of other animals were all packed in cages on top of one another. The Animal Rescue League of Boston (ARL) took her in, and her new family quickly adopted her.

Sophie is an incredibly sweet and loving cat, and just wants to be around her parents as much as she possibly can. For the first few nights after she was adopted, whenever her parents would head off to bed, she would head up to the top of their dresser and sleep there the entire night. It’s as if she wanted to be high enough to watch her parents, and to make sure she knew exactly when it was time to get up again.

“I tried to see if she would sleep in our bed but she insisted on always sleeping on the dresser,” Christiana Viscusi, Sophie’s mom, told The Dodo. “So after a few nights I cleared off the dresser and put her bed there. She’s been going up to her bed when we go to bed ever since.”

A small facsimile of a human bed serves as Sophie’s bed, and she even has a set of changing sheets and blankets. Every night, her mother tucks her snugly into bed, where she spends the whole night.

She spends the entire night nestled in there, according to Viscusi. She only leaves her bed once, at approximately 3 a.m., to have a food before returning there till my alarm goes off in the morning.

Sophie’s mom made her an Instagram account so the rest of the world can enjoy her adorable sleeping habits, too. People often question if Sophie’s mom is making her pose in the bed to take pictures …

… but Sophie really does sleep in her bed every single night, because she just wants to be close to her parents. When they get all tucked into bed and sleep through the night, that’s exactly what she wants to be doing, too.

Although Sophie enjoys spending time indoors, she also adores being outside.

Sophie will immediately come rushing and sit down to get her harness put on if I simply mention, “Sophie want to go outside?,” according to Viscusi. She could stand outside watching the yard for hours. She is waiting at the door and circling me to go outdoors when I get home from work. We have a schedule where we spend at least one hour outside after I get home since I know she’s been waiting impatiently all day.

A year after Sophie was adopted, Viscusi saw one of the neighbor’s cats began to follow them when she first started taking Sophie outside. Scottie would follow them everywhere they went, and as the weeks passed, he began to get closer and closer until, at last, he was always there by Sophie’s side whenever she walked outside.

Prior to learning that Scottie was rescued from a hoarding situation and adopted around the same time as Sophie, Sophie’s mother didn’t give it much thought.

Viscusi stated, “I honestly don’t know, but it’s extremely probable they were in the same area and each put in a separate shelter. “Just raises questions. Particularly considering that Scottie’s owners claim he hasn’t gotten along with any other cats and are surprised by how much he adores Sophie.

It’s impossible to know for sure if Scottie and Sophie came from the same home, but either way, they absolutely adore each other and love spending as much time together as they possibly can.

“Every time we are outside when he is, he runs right over to hang out,” Viscusi said. “In the summer it’s several times a week. If he sees us on our balcony from his lawn he comes over and cries up at us then goes and sits at our backdoor waiting for us to bring her out. It’s really cute.”

Despite having a difficult upbringing, Sophie’s charming demeanor and love of life have not been at all impacted by her history. She appears to be really appreciative of having a family that will love her for the rest of her days, a bed to sleep in, a companion to play with, and a bed to sleep in.