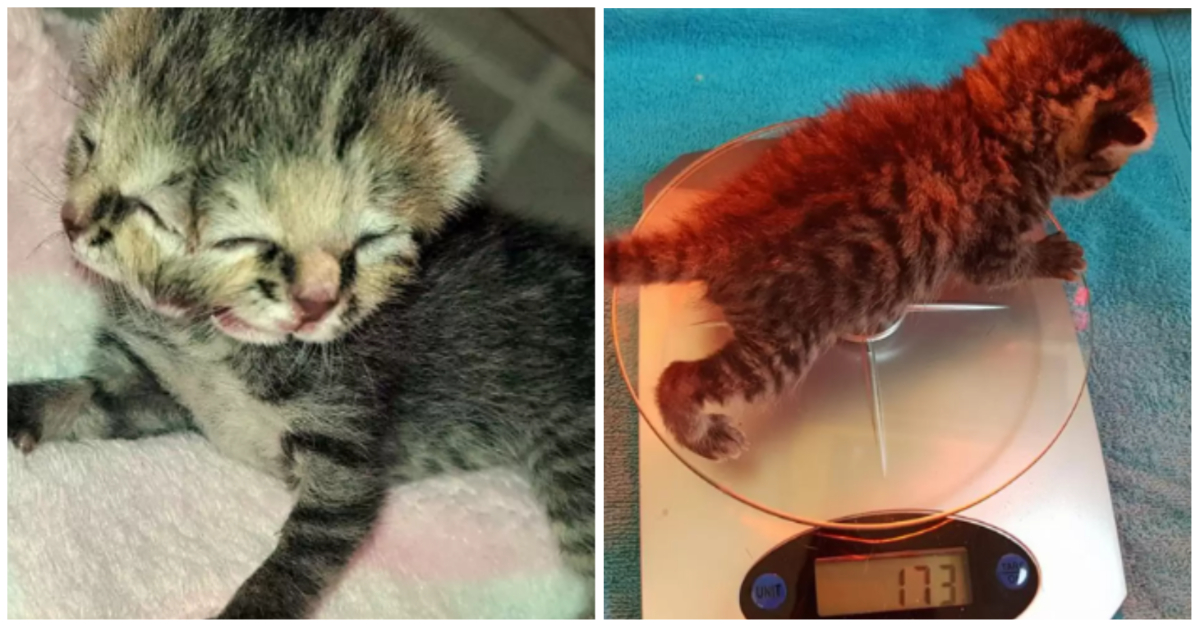 Three healthy kittens were delivered to a mother cat in the Eastern Cape of South Africa last week, but when their owner discovered four tiny newborn noses sniffing around her house instead of three, she was taken aback.

In fact, one of the kittens, subsequently named Bettie Bee, was born with three eyes, two noses, and two mouths due to a very unusual congenital disorder called craniofacial duplication, which duplicates some facial characteristics while a baby is still in the womb.

While Bettie Bee was healthy otherwise, her two mouths made nursing difficult — so her owner knew she needed to find someone who could help raise her. That’s when she found a local rescuer with experience raising special needs cats who was willing to take her in right away.

“She was born on December 12 and I went to fetch her the very next morning,” Bettie Bee’s rescuer, who wishes to remain anonymous, told The Dodo. “I took her to the vet that day and his first opinion was to put her down. But she was, at 1 day old then, very feisty. We wanted to give her a chance. And she’s been thriving.”

Bettie Bee, who is now one week old, quickly won her rescuer’s heart and is currently doing the same for everyone who sees her on social media. Bettie Bee’s rescuer decided to start a fan page for the remarkable cat since she was receiving so many letters and friend requests about her. On this website, updates will keep coming in as Bettie Bee gets older.

Although Bettie Bee had trouble nursing naturally, she’s doing well being tube-fed and surprisingly can eat through both of her mouths. Both lead down to her stomach, so she hasn’t had any problems getting her tummy full.

Although Bettie Bee’s illness is relatively uncommon, pigs, cows, and even people have all been known to exhibit it. Some animals with this feature pass away prior to or soon after birth, whilst other animals live happy, healthy lives. Frankenlouie, a two-faced cat, survived for 15 years until passing away in 2014.

Despite the odds, Bettie Bee’s rescuer is optimistic about the kitten’s future health and well-being.

She described her as “wonderful,” saying, “I still stare at her and can’t believe she’s real.” “I’m taking it day by day and am hopeful that she will have a long life with my husband and myself. It’s encouraging to see how many people support her.