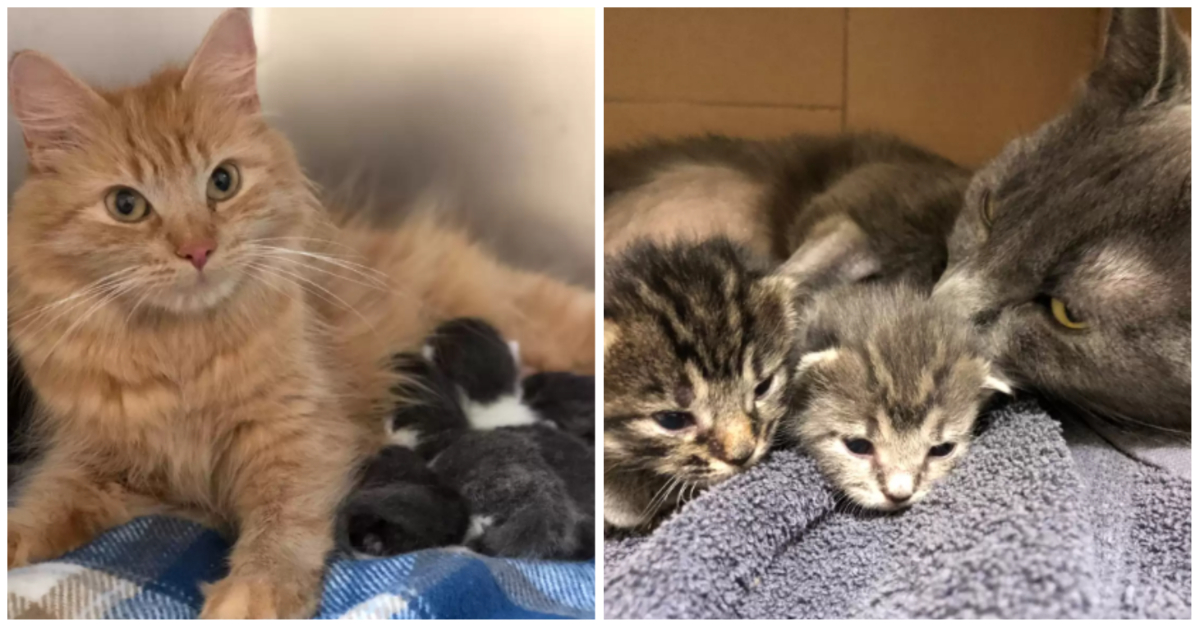 Something went horribly wrong after a cat named Church gave birth to a litter of five kittens.

In those early days on Earth, the little kittens needed their mother’s love and care more than anything, but Church was in terrible condition due to a prolapsed uterus. Church’s owner called the MSPCA-Angell shelter to see if they could aid her kittens since she needed to be taken to the hospital.

“Church’s owner was unable to get to our clinic so we rushed to the home and gathered her and [the] newborn kittens and raced them back to the adoption center,” Alyssa Krieger, community outreach coordinator for the shelter, said in a release.

“The kittens were weak and underweight because they were unable to feed.”

Luckily, a 2-year-old orange tabby cat named Betty happened to be there in the shelter, waiting for a home. And she was more than happy to help.

According to Krieger who spoke to The Dodo, “Betty was abandoned in an apartment complex and some Good Samaritans maintained her for approximately a month before bringing her here.”

It’s conceivable that she gave birth to kittens more than a month ago and was still mildly breastfeeding, but it’s also possible that she experienced a hormonal reaction, which is uncommon but not unheard of.

When Betty first met the kittens, she immediately started cleaning their sleek gray fur and putting her orange paws protectively around them. “She spent the next two days caring for all five kittens until Church was back on her feet and able to be with her kittens again,” Krieger said.

Church was reunited with her kittens after she had recovered sufficiently. She was not, however, able to produce enough milk for all of the little, hungry mouths after all she had been through.

Betty continued to feed three of the kittens as a result, helping Church.

“Neither cat was producing quite enough milk for all five kittens but we were very happy to see that each could support half of the litter. This was truly an it-takes-a-village moment,” Krieger said.

We seldom ever have a mom cat that can take over the care of another kitten, so we frequently have to bottle-feed kittens, Krieger said. But we were fortunate that Betty was capable and ready.

Church took the other four kittens home with her while Betty and one of the kittens were moved to a foster home. The kittens will be available for adoption when they are 10 weeks old.

The so-called hero cat will still require a home when Betty’s last litter is weaned.