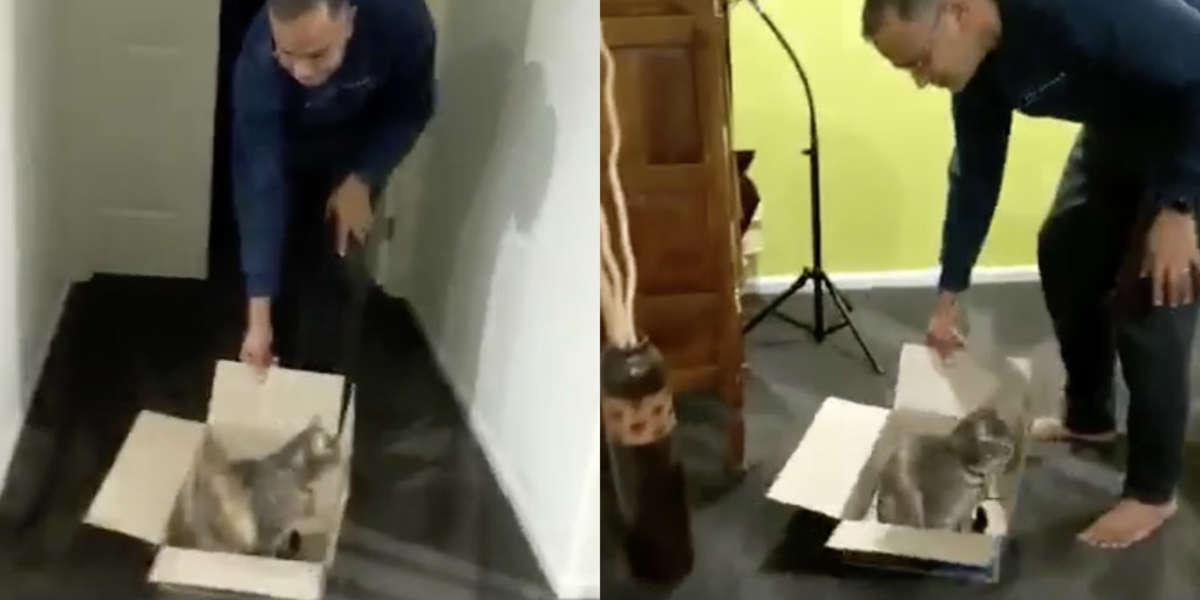 After being abandoned, Selina was adopted into her family, and ever since then, her dad has been her favorite person.

According to Selina’s family member Divya Krishnan, “He loves to carry her around like a baby.”

Selina and her dad have always had a special bond and love doing things together, and one night after he arrived home from work, they accidentally created a fun game that has now become their nightly routine.

Selina was relaxing in a box, one of her favorite activities, when her dad decided he needed to move the box. Rather than make Selina move, he just pulled the box to where it needed to be with Selina still inside it — and she absolutely loved it.

“He wanted to move the box one night while she was in it and then next minute she was in the box having the time of her life so now he always keeps at least two boxes upstairs for her to have a ride,” Krishnan said.

Now, Selina and her dad have a nightly routine. She waits at the door for him to come home from work, then follows him upstairs and waits for him to get changed. Once he’s ready, she hops into her box and he pulls her around for a while. It’s the perfect way to end the day, and Selina refuses to ever go without it.

“It always happens in the evening, same time,” Krishnan said.

Selina meows repeatedly until her dad receives the message if for some reason it appears like he won’t follow the pattern or if he’s taking too long. She is too devoted to their pattern to ever allow him to lose it.

Selina adores her father dearly and cherishes the opportunity to spend each evening doing something special with him. Of course, Selina’s father appreciates their routine and loves her just as much as she does. Their relationship has always been unique, and her dad would stop at nothing to see that Selina is content.