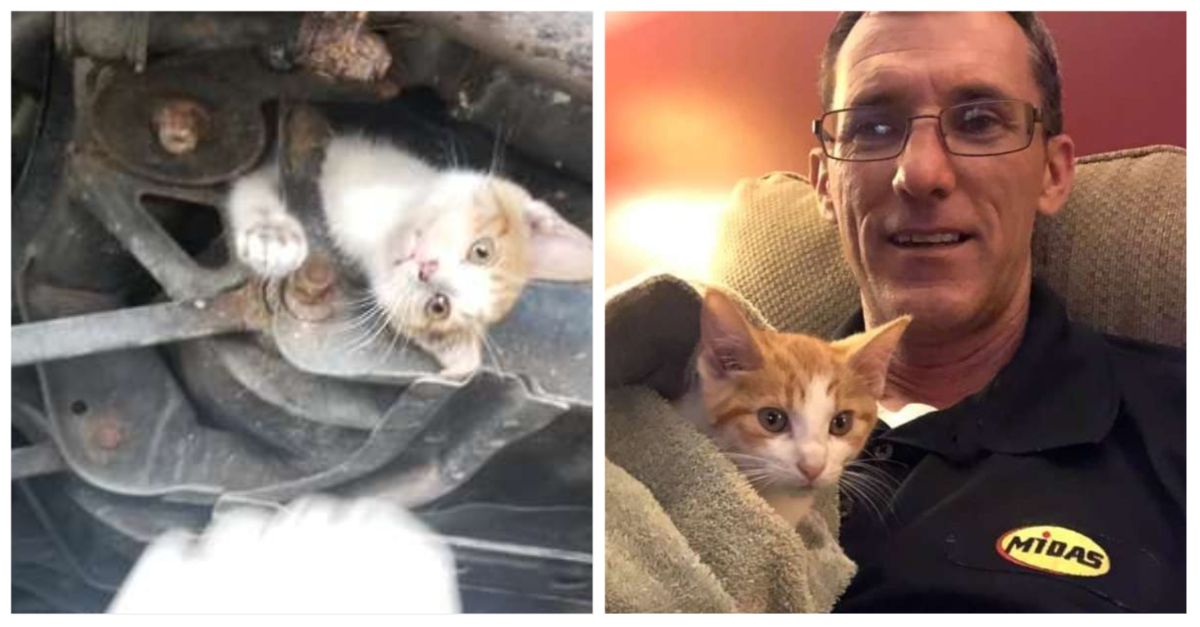 A 9-week-old kitten was found trapped under a car for several hours, and was clearly very tired and frightened. The kitten somehow got herself stuck under a man’s car who was waiting at the drive-through window at a Hardee’s restaurant in Frankfort, Kentucky.

The fast food workers heard a loud meowing sound coming from the speaker and discovered a cat caught underneath the driver’s car. It was obvious that the kitten was unable to escape on her own.

Everyone was incredibly worried about the tiny kitten, and hoped they could rescue her from the car as quickly as possible. Luckily, some mechanics from Midas of Frankfort, a nearby auto shop, came to save the poor kitten.

“She tried to crawl through a hole in the rear subframe and got lodged after realizing she couldn’t retreat backwards,” D. Scott Bourne, owner and managing director of the Midas of Frankfort, told The Dodo.

She was fairly gentle since she was exhausted and dehydrated, according to Bourne. It was difficult to determine how hot it was under the car because it was above 90 degrees outside.

The car owner was so grateful to the mechanics for helping out and even offered to pay the Midas team, but they declined because all they had wanted was to help the kitten.

The kitten, called Marigold, was transported to the veterinarian the next morning after being cared for by her rescuers overnight. She had a few scratches, but the veterinarian found that she was otherwise very healthy.

Marigold has been adopted and is now living a happy life in her new home because of the compassion and perseverance of her rescuers. Nobody is really sure how she got under the car or where she came from, but we are so grateful that she was able to find the loving home she so richly deserves.