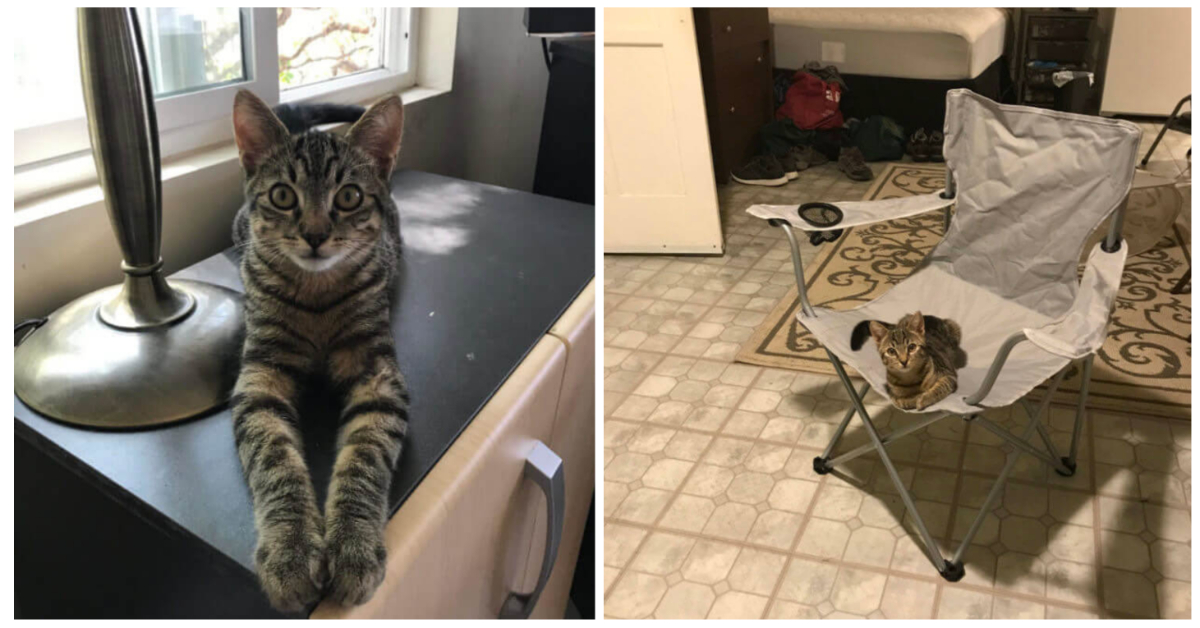 It was just an ordinary day when Imgur user Nigeltown came home to find an uninvited guest sitting in his favorite chair. He certainly never expected that leaving his window open could result in such a bold act of breaking-and-entering. Nigeltown took out his cellphone to capture photographic evidence of the crime as the brazen intruder stared back at him fearlessly.

“I came home from work to find…this little floof just chillin’ in my house. He must have come in through an open window,” Nigeltown wrote. “I don’t own a cat.”

The friendly tabby kitten was “meowing like crazy,” so the handsome and fabulous Nigeltown ran to the grocery store to pick up some cat chow! According to his Imgur account:
“Lil gato was so happy! He was meowing/purring as he ate.”

Nigeltown saw that his new home visitor had no collar, but just in case, he made the decision to scour the neighborhood for an owner. None of his neighbors mentioned owning cats or lately seeing a mother cat with a litter of kittens.

The kitty was not happy that Nigeltown left him home alone to conduct his search!

The following day, Nigeltown took the little floof to see the vet. They searched for a microchip, but did not find one. However, they did find fleas and intestinal parasites. Nigeltown had his new pal vaccinated and purchased medications to clear him of the unwanted pests.

The “gato” felt like a million bucks after he was rid of his parasitic hitchhikers! When he’s not “tearing about the property like a devil cat,” according to Nigeltown, he’s either sitting “on or around” his new owner!

Before allowing himself to get too attached, Nigeltown made one final sweep of his neighborhood to ensure that nobody was missing a mischievous tabby kitten.

Nobody claimed or even recognized the little stowaway, so Nigeltown decided to make their relationship official! He named the kitten Buddy and invited him to stay forever!“My Buddy boy,” Nigeltown wrote. “he adopted me.

Have you ever been adopted by a cat? Tell us about it in the comments!